Mad Mad Monkey, a five-reel, 50-payline video slots title from Amaya Gaming, features a chirpy theme tune enhanced with wild monkey cries. Set in a tangled forest scene with butterflies flitting in the background, game play is enlivened by frequent appearances of the titular monkey, as he cavorts around the reels celebrating wins. In the event of a big bonus round win, a whole troop of monkeys appear and go ape.

Colours in Mad Mad Monkey slot are bright and bold, and relate to the jungle theme, with even the five poker symbols entwined in forest vines. All the symbols are paired in value, although they must make identical matches of three of a kind or better to win prizes, and cannot combine with other icons of equal value. So 10s win the same prizes as Js, Qs are equal in value to Ks, As win the same prizes as the Peanuts icon, and the Coconut and Snake icons are also of equal value, each winning 400 coins for five of a kind.

The Parrot and Golden Banana icons also share the top values available in Mad Mad Monkey regular play; namely 24, 50 or 1,000 coins for three, four or five of a kind, respectively. However, the Golden Banana is also the only regular symbol that pays a prize for two of a kind, worth 4 coins.

The Wild can Stack

The Mad Mad Monkey himself, with a huge grinning muzzle, acts as the Wild symbol, as usual able to replace any symbol in a winning combo. All wins that feature a Wild are paid double prizes. If it appears on Reels 2, 3 or 4, the Wild can stack to fill two, three or all four rows on the reel, leading to even more prize-winning possibilities. 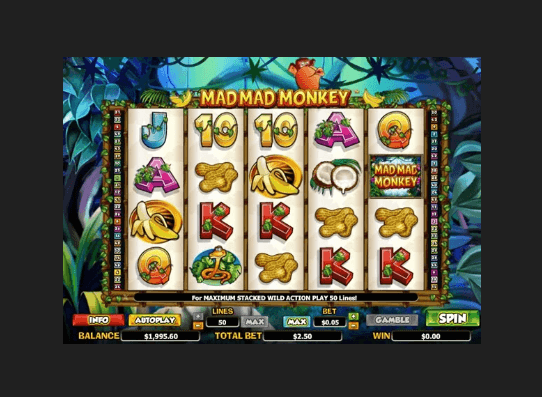 Multipliers and Free Games from the Scatter

The Scatter symbol is the Mad Mad Monkey logo, and two or more appearing anywhere on the reels will pay out a multiplier of the total bet on the spin. This is X2 for two Scatters, X4 for three, X30 for four, and X400 for five. Three or more Scatters also trigger 10 free games, and for the highest wins and multiple stacked reels, players should be playing all 50 paylines.

During Mad Mad Monkey slot free spins, the Golden Banana symbol can stack to fill the entire reel whenever it appears. The Wild stacking feature also continues to operate during bonus rounds, and all wins made on free spins are tripled.

As in many Android optimized slots at https://canadianslotsonline.org/android, players can use the Mad Mad Monkey Auto Play button to play up to 25 spins with a single click. It is advisable for players to adjust their bets before starting an Auto Play sequence, to make sure they don’t deplete their bankroll too fast. Mad Mad Monkey also features a Gamble button, allowing players to take a chance on doubling or quadrupling low wins by guessing a card colour or suit. Jackpot wins, namely five Golden Bananas or five Wilds, cannot be gambled.